If you’re on TikTok and love makeup then you most likely have seen a few makeup products go viral. After seeing so many reviews of these products, I definitely became tempted to go and try them out for myself. Although I haven’t had the chance to try all of the viral products, some brands are getting a lot of attention on the app. Here’s what products and what brands are getting all the hype on TikTok.

Several e.l.f products have gone viral on TikTok. Many influencers like Makeupbymonicaa, Missmonolids, and professional makeup artist Robert Welsh have all raved about their products. They are known for creating inexpensive good quality products. They recently released their e.l.f Camo CC Cream which many are saying is a dupe for the IT Cosmetics CC Cream. The e.l.f Camo CC Cream is $14 (USD) while the IT Cosmetics CC Cream is $52. The Poreless Putty Primer  which goes for $10 is believed to be a dupe for Tatcha’s Silk Canvas Primer which sells for $68. Their most talked-about product on the app is the 16HR Camo Concealer and Hydrating Satin Camo Concealer. I’ve tried both and I love their Hydrating Camo Concealer. The original Camo Concealer is a bit too drying for my under eyes. It’s full coverage, long-lasting, and it’s only seven bucks. Other products that have been spotted on TikTok are their Lip Exfoliator and Putty Blushes. Although I haven’t had the chance to try their Putty Blushes I have tried theLip Exfoliator and it’s worth the four bucks. A lip scrub in the form of lipstick is a genius idea. Say goodbye to your chapped lips! If you want to try e.l.f’s products then you’re in luck because e.l.f is even more accessible in Canada as it is now available at Shoppers Drug Mart. Before that, you could only find it at Wal-mart, Old Navy, and Rexall.

NYX is another brand whose had several products go viral on TikTok. Glamzilla a TikToker who is known for making their Shine Loud High Shine Lip Colour go viral. I have tried it and it’s not bad; but I do think they have better lip products than that. It is one of their more expensive lip products, selling at $15. It is two products in one: it contains a high pigment base coat and a non-sticky top coat. The pigment side feels super sticky and uncomfortable on the lips but when you apply the topcoat on,it looks really nice and it becomes transfer-proof. Other NYX products that have gone viral on TikTok are their Marshmallow Smoothing Primer, Lift & Snatch! Brow Tint Pen, and Brow Glue Instant Brow Styler. Unfortunately, NYX is closing all retail stores in Canada. However, you can still shop their products in stores and online at Shoppers Drug Mart.

The Rare Beauty Soft Pinch Liquid Blushes is all the rage on TikTok. So many makeup lovers have tested them out including TikToker Mikayla Nogueira. We didn’t get our hands on them, but after seeing all the reviews I can definitely see that a little goes a long way. I understand the hype because they blend out beautifully on the skin.

KVD has recently gone through a rebranding  and is now a “tattoo inspired vegan beauty brand.” In March, they released their new Good Apple Skin-Perfecting Foundation and makeup lovers on TikTok were shocked at how full coverage it is. Makeup vloggers Glamzilla, Carla Delrey, Mikayla Nogueria tried the foundation on the app and showcased its smooth creamy finish. Many were influenced to buy the foundation and it quickly sold out before we had the chance to try it. However, based on reviews, many are saying it’s not a great foundation for oily skin because it’s meant to be hydrating and has a very creamy consistency. Make sure you set your makeup with powder and setting spray to increase the longevity of the foundation.

After Madison Beer used the Charlotte Tilbury Beauty Wands on Vogue’s Beauty Secret series on Youtube, everyone wanted to try them. Cream products are all the rage this year, and after seeing how seamless they blended onto her skin I knew I had to try it out. I got my hands on the Charlotte Tilbury Hollywood Contour Wand and the Highlighter Wand and I have to say they are worth the money. They are $50 each but it looks so incredible on the skin. It requires zero effort for it to look flawless on the skin 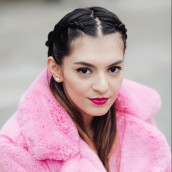 I’m a writer, photographer, and the (occasional) model. I’m a sass queen, fashion enthusiast, and makeup addict. When I'm not busy writing about all things fashion and beauty, I'm busy trying new trends and products My goal in life is to discover the best tips and tricks and share them with the world. My past time hobbies include: Binge-watching TV shows on Netflix, spending money I don’t have, and contemplating whether or not to UberEats Mcdonalds.