The Beauty of Eczema now available across Canada!

Here’s a cute one… Because who doesn’t love dogs?

May 20 is National Rescue Dog Day. I know, there are so many national holidays and titles but this one is especially great…. Because who doesn’t love dogs??

Every year, millions of animals (specifically dogs) are abandoned on city streets, left to fend for themselves without any knowledge of how to get by. Rescue Dog Day was created to raise awareness for dogs that were left on the streets or in shelters, in hopes that people would adopt instead of buy (from a breeder, for instance).

According to the ASPCA three million dogs enter a shelter home every year! These dogs suffer from trauma in the form of abuse and/or neglect before entering a shelter; however, they can prove to be emotional support for their new (and hopefully loving) human owners. Bianca is my rescue pup and first big fur baby. I always wanted a dog and as a kid researched different breeds and where to get them (it was overwhelming) and in the end I couldn’t decide and my parents weren’t convinced either. We gave up on the idea of a dog until I was a little older, we decided on adopting instead of buying from a breeder. Still unsure of what kind of dog we were looking for, my mom looked to PetSmart Charities and found out about a litter of puppies that were unwanted. The parents weren’t neutered/spayed and had puppies that the human owners couldn’t take care of.

Out of the crowded and unclean household, we brought Bianca into our loving home. She had a skittish personality but after a while she got a lot more comfortable with us and other people too! Scared or not, she would always try to come to my side in times of stress and help calm my anxiety and to this day Bianca lifts my spirits every time.

We still don’t know her exact breed (or mix of breeds) but it doesn’t matter. We love her and she loves us. And not to be cheesy but through everything we have gone through (health problems, conflict, Covid-19…) we may have rescued her, but really, she saved us. “I first learned about kill shelters when my friend Megan adopted a dog from Spain. This whole phenomenon was unknown to me before. She showed me pictures of a large, almost white, young Labrador-like who was with a foster at the time. A few weeks later he happily walked through the stables with us. He played with our spoiled Dutch fur babies. I had Sky at the time who was not even a year old back then. Sky was my new team member and together we could take on the world. When Megan’s dog Sam came, the idea was planted in me: I wanted a rescue dog too. For my husband this was not an option and so I came up with the idea to at least sponsor one. However, there were so many countries, so many injustices, so many poor dogs to choose from.

I ended up choosing Bals Shelter in Romania and in July I sponsored my first of many puppies, Daisy. It was so satisfying to do this, to make the difference between life and death for these dogs. Some had been thrown out of cars, found in rubbish, brought by their owners because they were sick or old, but most of them were randomly picked off the street by dogcatchers simply because it was their way of making money.

Nala came in December. She looked like my dog Sky and something about her made me fall in love with her instantly after seeing she was available for adoption. The journey from Bucharest to the Netherlands took more than two days and Nala was one of the 50 lucky dogs who left the country where there was no future for them. On Saturday April 10, at six o’clock in the morning, the van pulled up in front of my door. “Save a Life, Adopt a Shelter Pet,” it said on the side. Two Romanian men got out and one remained behind the wheel. “You have a harness?” One of the men asked in poor english.

I handed him Nala’s new harness, and five minutes later she was standing in the street, looking around wildly. She didn’t take a step and the man picked her up and put her in my living room. I got her passport and they were gone. Sky was curious about this intruder and wanted to play with her while Nala looked around a bit dazed. She smelled like a camel and her fur was extremely greasy, her legs brown from the dirt she’d been in but tears streamed down my face with happiness, there she was finally.

I had been warned that foreign dogs often have trauma, could not walk on a leash, can’t stay home alone, not in the car, and she might not like Sky… But Nala was a dream. She learned to walk on a leash within a week, she and Sky fell in love immediately and getting into the car was a party. She eats well, is sweet and playful and now, after five weeks, she already behaves like a normal house dog.

She is now clean and soft and is walking on a regular collar instead of a harness. You wouldn’t be able to guess that she used to be a street dog in a country where dogs belong in the garbage category. She runs through the woods with Sky, jumps in ditches and sleeps in bed (yes, sometimes in that order).

Adopting her is the best and most beautiful thing I’ve ever done. I know puppies are cute (Sky came to me as a puppy too) but there are so many strays who need us. It would be nice if more people would consider adopting one.

In the meantime I still sponsor dogs from Bals. At the moment the group is desperately looking for new members. If you also want to sponsor a dog, join the Care and Compassion for Bals Shelterdogs Facebook page and give these poor dogs a chance to have a warm basket and a loving family of their own.” (By Sjoukje van Otten) As if we needed another reason to love dogs…. This National Rescue Dog Day, let’s celebrate all dogs, animal-human friendship and empathy.

Share your story with us on Instagram or in the comments for a chance to be featured on FBI STYLE!

What else can you do on National Rescue Dog Day? 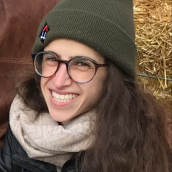 I'm a curious, creative, enthusiastic individual with an eye for a good story. As a Bachelor of Public Relations graduate from Humber College, I am passionate about communications and DE&I and sustainability issues. Find me happiest while drinking coffee, snuggled up to my dog, and reading a book or learning about local cultural hotspots.

The Beauty of Eczema now available across Canada!

Underrated Countries to Travel to in 2022

Jaybird Studio: a complete holistic experience for the body and mind

Nature’s Sunshine has all the important supplements you need for the season!